“I love to teach in my school, and I love to be with the students and the children.” – choreographer-teacher-dancer-singer Usha Gupta

For an artist of distinction, it’s the ultimate validation.

After a lifetime of refining her art and some 30 years teaching dance and music to Canadians, Edmonton’s preeminent mistress of Indian classical dance — Usha Gupta — is about to be celebrated in her land of origin.

Starting next week, the Usha Gupta Dance Entourage will tour 10 cities in India, performing at many top venues to festival crowds of thousands in some cases. Booked by some of India’s top promoters, the choreographer and musician will sing (in Sanskrit and Hindi), dance, and lead a dozen dancers and musicians in her show Khoj (or The Search).

A seven-city tour of Canada will see her ensemble reprise Khoj here next July.

First produced here in May 2018 as part of Brian Webb Dance Company’s season, that show draws from the ancient classical tradition of kathak dance and the Lucknow gharana (or school) of Northern India where Gupta was born 78 years ago, in the province of Punjab.

But this unforgettable character of the Edmonton arts scene is the first to admit that her approach to dance is a reflection of years of exploring, a hybrid of influences including flamenco and other contemporary western styles. And finally, somewhere, Khoj becomes a personal expression of all that she has experienced.

“At the heart of my inspiration for this piece is the idea that if you search for the beauty within an unshaped space, the poetry inherent in the physical body will be revealed. The spirit of dance will be expressed, similar to how a sculptor searches for the statue hidden within the uncut rock.”

While Khoj takes off from the delicate movements of the wrist, neck, eyes and brows in kathak dance, the work encompasses a splendid spiritual uplift in its Sufi-inspired search for divine truths. Six musicians under the direction of composer-musician Praveen Rao create a fascinating acoustic-electric soundscape that draws from Indian classical music.

Two superb professional women dancers of Indian-Canadian heritage — Marla Palakkamanil Gill and Riya Alika Mittal (Gupta’s grand-daughter) — who started careers through their training with the dance mistress will be joined by several male colleagues in India who have also worked with Gupta’s ensemble before. Brian Webb joins the tour as the group’s dramaturge. 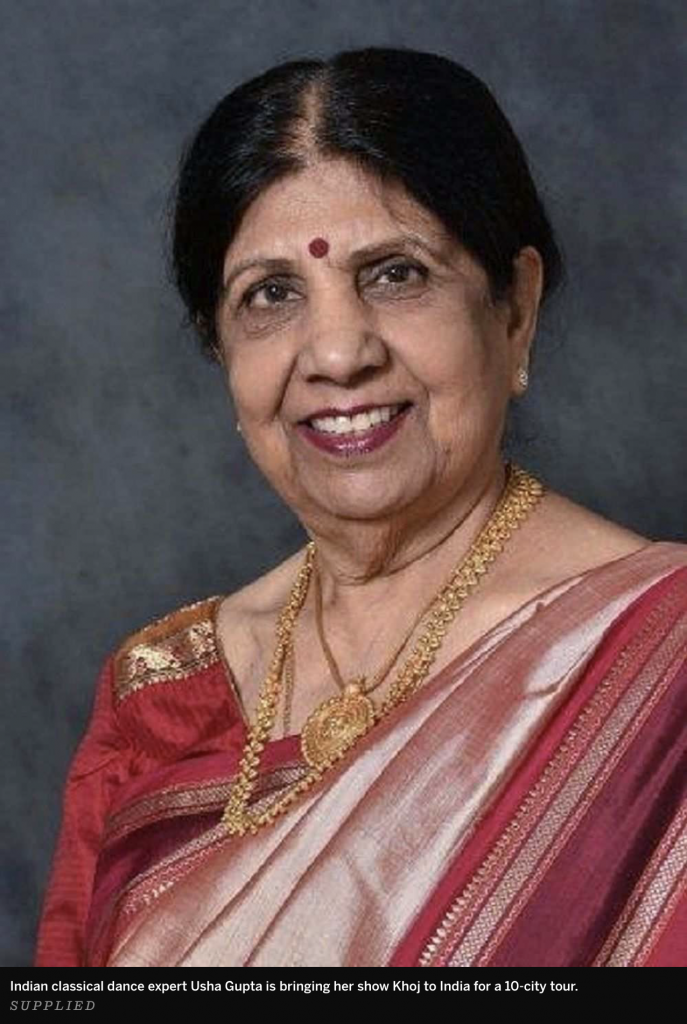 The journey leading up to this 43-day tour of India is nothing that Gupta ever could have imagined when she and her husband first came to Edmonton to see their only daughter in the late 1980s. Several years later her husband (an airline and hotel executive) left to return to India.

Suddenly she was a single woman wondering how to get by on her own. Luckily, she had extensive training and experience to fall back on.

In spite of their own musical background, Gupta’s parents encouraged their children to take up music and dance to make them desirable matches for marriage. It was actually her mother-in-law (the principal of an arts college) who pushed Usha to study further and teach.

In a recent conversation over samosas and tea, Gupta recalled the customs of her early life:

“My parents used to think music and dance was very important to have for grace and charm so all my sisters — all six of us — were trained, but girls never used to work in those days.”

She finished her first of two masters degrees (in music and dance) even before she married and moved from her birthplace in Julandhar, Punjab to the metropolis of New Delhi. Already a teacher and featured singer on All India Radio, she was also hired to choreograph dances for television as that new medium took off commercially in the 1960s.

A subsequent move to the Middle East, to Dubai and then Qatar, brought her further invitations to produce music and dance events for international clients. It was her daughter’s marriage to a Canadian that brought her to Edmonton on a visit in 1986, and then to live in 1989 (Gupta’s other child, her son, is a singer back in New Delhi).

She started a school in her basement in 1989 with two students. Since then enrolment at her studio on Calgary Trail (Usha Kala Niketan, or Usha Arts Studio) is usually closer to 100 or more students, training in kathak, bharatanatyam and other classical styles. After 30 years she has taught over 10,000 students from all walks of life, ranging in age from three years to 60.

“I love to teach in my school and I love to be with the students and the children.”

Gupta has contributed choreography to operas here and in Vancouver and fostered the careers of numerous dancers and musicians, playing a key role in building Indian culture here through teaching, festival presentations and fundraising.

Inducted into Edmonton’s Arts & Culture Hall of Fame in 2016, she’s brought her expertise to organizations like the Alberta Dance Alliance, the Edmonton Arts Council and more. Indian music fans have witnessed her play accompanist on the tanpura drone for visiting greats in Raga Mala Society concerts. And as she finishes off her eighth decade Gupta still manages to put in around five hours of practice every day as she teaches.

Brian Webb was head of the dance department at MacEwan College when he learned about Gupta in 1996 and asked her to host a workshop. The following year she brought chanting and music and dance to her first show under the umbrella of Brian Webb Dance Company, and her projects have been a frequent part of BWDC, including the premiere of Khoj in 2018.

“He’s always asking me ‘what is next Usha?’ when I haven’t had a chance to think about it. Brian has been major in my story, and he’s a very good friend.”

Webb is effusive in praising his friend’s achievements, but in the end he points to what she has done for Edmonton’s cultural community.

“What she’s doing is contemporary but at the same time, quintessentially Indian. She’s helping to preserve these art forms here in Canada while India itself is so caught up in today. And she’s bringing the community into her art. There are many sides of Edmonton in this show.”

She’s understandably excited over the breadth of her upcoming tour which — after Mumbai, New Delhi, Kolkata and other major centres — winds up in her hometown.